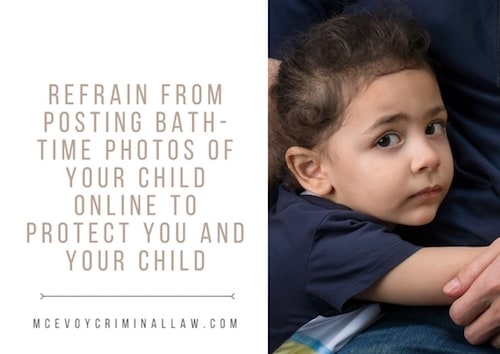 The average parent will share almost 1,500 pictures of their baby or toddler online, according to research by Parentzone.org. Posting pictures of your children during bath time may seem like a harmless and cute way to share memories with your friends and family, but you could be committing a serious, punishable crime, and the law may not always take your side.

You Could Lose Custody of Your Children

There have been news reports in cases where parents tried to get their children’s bath-time pictures developed in studios and drug stores. Some of these parents were suspected of being in possession of child pornography and were reported to the authorities. What ensued was a long and painful court battle in which the parents tried to regain custody of their children.

For example, in one Arizona case, a couple was accused of being in possession of child pornography after they tried to develop vacation photos at their local Walmart. In this case, out of 144 pictures that were taken during the family’s vacation in San Diego, about seven or eight were bath-time pictures of the couple’s three children. These pictures showed portion of the children’s genitalia, and Walmart subsequently called the authorities. What followed was a stressful month-long wait for the couple to regain custody of their three children.

As a new parent, you are likely to take many photos of your children, especially when they are small, because you want to remember all the cute moments and significant events in their lives. It’s tempting to want to share your favorite memories with the people you love, but just keep in mind that bath-time pictures can become risky. Take the extra precaution and refrain from posting such photos online.

If you were not aware of this and have already been charged, seek expert legal representation. The Law Office of Bernie McEvoy is experienced in dealing with criminal defense charges. If you’re a parent or guardian who has been charged with exploitation of a minor or another sexual online offense, contact our office today.